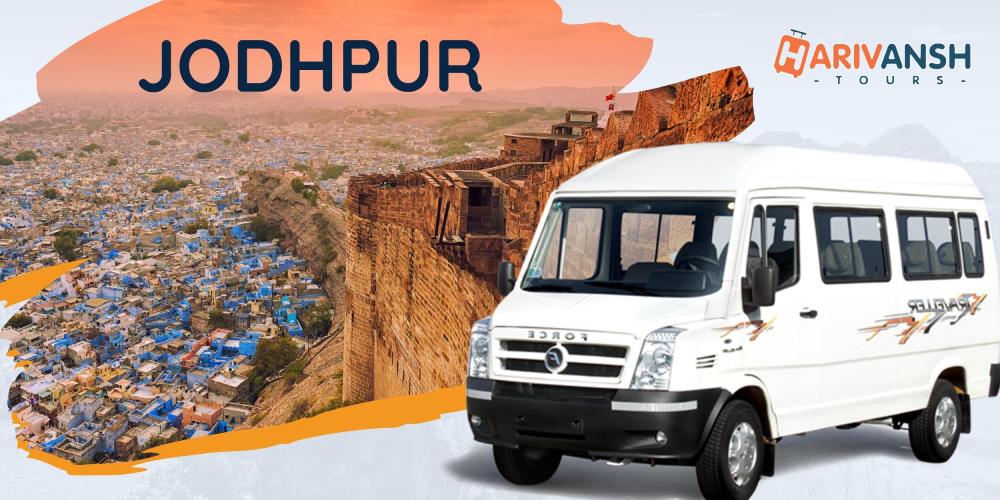 Jodhpur is a city located in the Thar Desert in the northwestern Indian state of Rajasthan. Its 15th-century Mehrangarh Fort, a former palace now a museum, displays weapons, paintings and elaborate royal palanquins (sedan chairs). Perched on a rocky ledge, the fort overlooks the walled city, where many of the buildings are painted in the city’s iconic blue shade.

Jodhpur, the second largest city of Rajasthan, has become a tourist attraction due to its glorious history and natural beauty. Apart from the vast Thar Desert, it is also known for its magnificent palaces, forts and temples. Jodhpur is also known as Sun City. Mehrangarh Fort is also known as the Blue City because of the abundance of blue colored houses. In 2014, this city got the first place in the list of Most Extra Ordinary Places in the world. Many festivals and fairs are organized here in which people from outside the country also participate. Nagori Pushu is the only fair in the world where cattle are bought on a large scale. There are many lakhs of animals here. However, Jodhpur is also called the judicial capital of Rajasthan, as the High Court of Rajasthan is located here.

Places to visit in Jodhpur:

Why do you need tempo traveler in Jodhpur?

Jodhpur, also known as the Blue City or Suncity, has a rich heritage history and is famous for the most splendid forts and splendid tourist places. It is also known for its unique textiles and handicrafts, finger-licking food and exotic views. Jodhpur is a must visit if you are traveling alone or in a group.

Mehrangarh Fort, Umaid Bhawan Palace, Mandore Garden, Jaswant Thada, Clock Tower, Sadar Market, Kaylana Lake and Rao Jodha Desert Park are some of the best places to visit in Jodhpur. Get ready to witness the real culture of Jodhpur and create some unforgettable memories with your friends or family with Tempo Traveler Services of Rajwada Cabs.

If you are planning to bring your family for a much awaited trip, coming to enjoy your holidays with your close friends, organizing a reunion, or bringing students for an educational trip then Rajwada Cabs has got you covered! We have a wide range of fleet vehicles to choose from and a range of tempo traveler seater options.

When traveling with 8+ passengers, our medium-sized tempo passengers are absolutely ideal. This size of Tempo Travellers in Jodhpur comes with ample walking space, legroom and adjustable seats. With a 9-seater tempo traveller on hire in Jodhpur and a 12-seater tempo traveller in Jodhpur, you can easily cut down on per-person costs when arranging corporate outings or family functions. With our many budget-friendly packages to choose from, you can sit back, relax, and enjoy your time with friends and family while our expert drivers drive you around.

We do not want you to compromise on space or comfort while traveling and hence tempo passengers falling under this category serve the right purpose. With our 14-seater Tempo Traveller in Jodhpur and 17-seater Tempo Traveller in Jodhpur, you can travel without compromising on affordability and comfort. When traveling with 15+ passengers; a sizable Tempo Traveller with plush interiors, reclined leather seats and premium quality audio system to get you to travel in luxury designed for your comfort. You can also rent a car in Jodhpur depending on your requirement. Needless to mention, whatever your needs, Harivansh Tours has the perfect vehicle for you.

Ample moving space and ample legroom are a top priority when traveling with kids and grandparents. With Harivansh Tours having huge tempo passengers, these factors are well taken care of and also prove to be a cheaper option as compared to SUV or Innova. Apart from these benefits, Harivansh Tours offers a transparent billing system, competitive per km tempo passenger rates, no hidden charges, 24/7 support and well-maintained driver-driven minibusses that make Harivansh Tours the right choice when You need a tempo traveller. For exterior in Jodhpur.

Why Hire Tempo Traveller in Jodhpur

When you hire a Tempo Traveller in Jodhpur from Harivansh Tours, you can definitely expect clean vehicles, transparent billing, guidance from our road trip experts, courteous driver and reliable services. Exploring a city has never been this easy and when it comes to it without compromising on comfort or affordability, you only get the best of the experience to take home. Some of the other benefits that make Tempo Travellers a perfect choice for all your travel plans are –

Harivansh Tourism offers a wide range of tempo Traveller services to and from Jaipur Airport at the lowest fares. You can choose from 9 seater, 12  seater, 14 seater, 16 Seater & Maharaja tempo Traveller depending on your requirement and make your booking online. We provide door-step service to our customers- from the airport terminal to your home or vice versa. Enjoy a comfortable and safe riding experience with extra leg space for all. Never worry about delays in on-time pick-up and drop services with Harivansh Tours.

Hire our Tempo Traveller service for pick up or drop from Airport or Railway Station at the below :

Note:-Toll Tax & Parking Charges Will Be Paid By You Directly.

Also called the Blue City, Jodhpur forms an important part of the royal heritage of Rajasthan. From azure plaster houses to ornate palaces and Havelis, Jodhpur is a delight for travellers. With a tempo passenger fare in Jodhpur, you can drive through the nooks and crannies of the city and travel like a local. Choose from our options of 9, 12, 14, 17, or 21 seater Tempo Traveller in Jodhpur and visit the famous Umaid Bhawan, Mehrangarh Fort and Rajaram Meghwal burial place. Visit Rao Jodha Desert Rock Park or Clock Tower for great sunset views and evening activities.

With your Tempo Traveller in Jodhpur, you can also walk the city’s famous food trail and sample local cuisine or shop for souvenirs. If visiting in autumn, don’t miss out on the annual Rajasthan International Folk Festival and experience the region’s rich art, music, and more.

Jodhpur itself is luxurious and perfect but for an all-around holiday, you have to look beyond the city. The city is surrounded by equally attractive places like Jaisalmer, Khimsar, Pokaran, Phalodi and Osian. You can also hire a Jaipur to Jodhpur tempo passenger for a twin-city tour. With Savari’s Tempo Traveller fares in Jodhpur, you can now make the most of your family or group vacation!

UmaidBhawan Palace, built by Maharaja Umaid Singh between 1929 – 1942, this beautiful palace is a splendid specimen of the Indo-colonial and artistic style of the 30s. A unique feature of this palace is that the hand-carved sandstone blocks are placed together in a special system of interlocking, which looks amazing and attractive. An excellent museum has been built inside it. You can enjoy this historical museum by booking a car rental service in Jodhpur with us.

Mandore garden, the ancient capital of Marwar, is 9 km from Jodhpur. The extensive gardens are beautifully laid with high rock terraces. The ‘hall of heroes’, houses sixteen gigantic figures, chiseled out of one single Rock and the nearby cenotaphs make it a popular picnic place. To visit and enjoy this Garden Place, you can use our car hire service in Jodhpur. 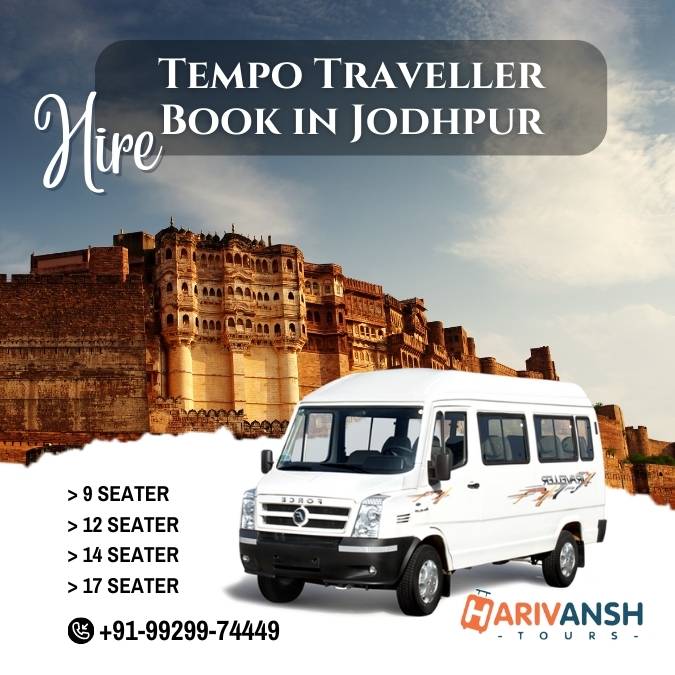 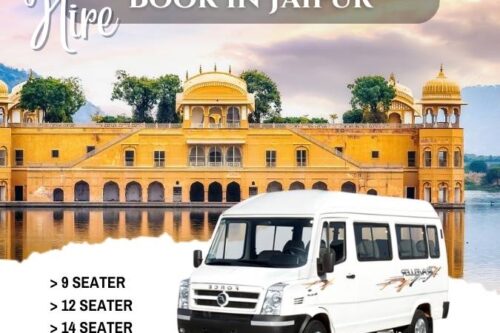 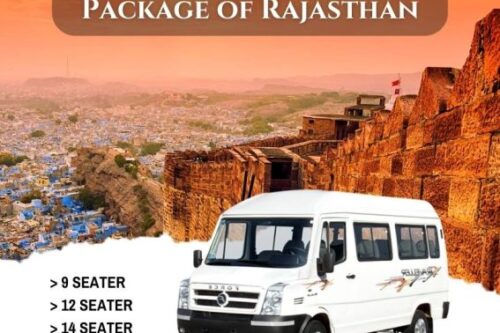 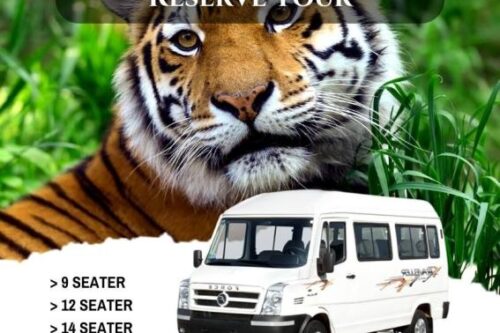 Q.1 What is the price for a tempo traveller in Jodhpur?

For a tempo traveller in Jodhpur, we recommend you to get in touch with Harivansh Tours customer support team on 91-73000-74449 for the best fares.

Q.2 How many types of tempo travellers are there?

Harivansh Tours offers all types of premium tempo traveller in Jodhpur (small, medium, or large) service including local, outstation as well as airport transfers at the lowest fares.

Q.3 How many seats does a tempo traveller have?

Q.4 Do tempo traveller in Jodhpur  have AC?

Q.5 Do you have a music system for tempo traveller in Jodhpur?

Yes, our tempo traveller in Jodhpur is equipped with premium-quality music systems.

No votes so far! Be the first to rate this post.